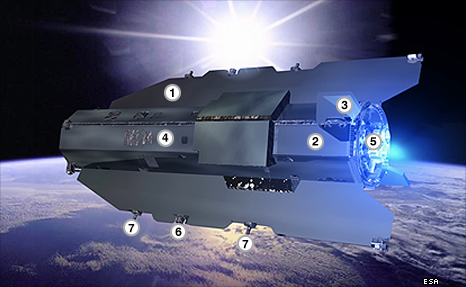 · The 1,100 kg GOCE is built from rigid materials and carries fixed solar wings. The gravity data must be clear of spacecraft 'noise'
· Solar cells produce 1,300 W and cover the Sun-facing side of GOCE; the near side (as shown) radiates heat to keep it cool
The 5m-by-1m frame incorporates fins to stabilise the spacecraft as it flies through the residual air in the thermosphere
· GOCE's accelerometers measure accelerations that are as small as 1 part in 10,000,000,000,000 of the gravity experienced on Earth
· The UK-built engine ejects xenon ions at velocities exceeding 40,000 m/s; GOCE's mission will end when the 40 kg fuel tank empties
· S Band antenna: Data downloads to the Kiruna (Sweden) ground station. Processing, archiving is done at Es a's centre in Frascati, Italy
· GPS antennas: Precise positioning of GOCE is required, but GPS data in itself can also provide some gravity field information

GOCE (Gravity field and steady-state Ocean Circulation Explorer is a large ESA satellite designed to map minute variations in the Earth's gravitational field. GOCE's main instrument – a gradiometer – is so sensitive that it can detect variations in gravity equivalent to the change in acceleration caused by a snowflake landing the deck of a supertanker. To enable it make such precise measurements, GOCE uses an ion engine to maintain a steady path in spite of the slight buffeting it gets from traces of atmosphere in the low orbit in which it moves. This engine is throttled up and down, producing tiny levels of thrust by firing xenon atoms through nozzles at the rear of the spacecraft. GOCE also uses an arrow shape and fins to keep it stable as it flies through the outskirts of the thermosphere at an altitude just under 270 km.

GOCE's gradiometer is the most sophisticated instrument of its kind ever produced for a satellite. It consists of three pairs of accelerometers at 90 degrees, across each axis. The entire set-up is mounted inside an ultra-stable casing. As GOCE travels through Earth's gravity field, the accelerometers sense incredibly small disturbances. The data collected will feed into a number of scientific issues. Understanding how the mass of ocean waters circulate, moving heat around the planet, will help in climate prediction. A better knowledge of the way mass is distributed inside our planet will be useful to those who study geo-hazards such as volcanoes and earthquakes. And because gravity defines what is meant by "up", "down" and "level", the new data can underpin a truly universal system to compare heights the world over.

GOCE is the first of ESA's Earth Explorers, a series of spacecraft that will provide quick answers to key environmental questions. Six missions have so far been approved; a seventh is in discussion. All will use cutting-edge space technology to acquire their data.