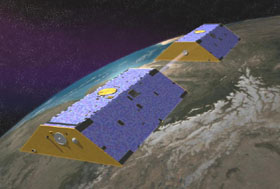 GRACE (Gravity Recovery and Climate Experiment) consisted of two identical spacecraft that, over a five-year period, will measure and map variations in Earth's gravitational field, and track ocean circulation and the movement of ocean heat to the poles. Selected as the second mission in NASA's ESSP (Earth System Science Pathfinder) program, the dual satellites of GRACE fly in the same orbital plane, one 220 km behind the other, at an altitude of about 550 km. However, the distance between them changes as they are influenced differently by subtle gravitational changes over such terrestrial landforms as ice sheets and mountain ranges. By continuously measuring the distance between the two satellites, scientists are able to chart Earth's gravitational field to a new degree of accuracy. In addition, GRACE is yielding novel information about Earth's atmospheric profile and ocean circulation. The mission is a joint partnership between NASA and the German center for aerospace research, DLR.