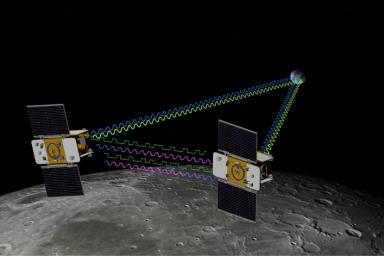 Artist's concept of GRAIL's twin spacecraft in orbiting the Moon.

GRAIL (Gravity Recovery and Interior Laboratory) is a mission consisting of twin spacecraft which will fly in tandem orbits around the Moon for several months to measure its gravitational field in unprecedented detail. The mission will also answer long-standing questions about the Moon and provide scientists with a better understanding of how the Earth and other rocky planets in the Solar System formed.

GRAIL is part of NASA's Discovery Program. the two spacecraft were launched on September 10, 2011, by a Delta II rocket from Cape Canaveral Air Force Station. They arrived at their orbits around the Moon 25 hours apart. The first probe entered orbit on December 31, 2011 and the second a day later. The two spacecraft impacted the lunar surface on December 17, 2012.