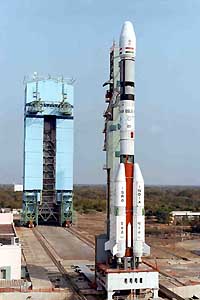 GSLV (Geosynchronous Satellite Launch Vehicle) is India's latest four-stage launch vehicle, capable of placing 2,500-kg Insat-type communications satellites into geostationary transfer orbit. The GSLV improves on the performance of the PSLV (Polar Satellite Launch Vehicle) by the addition of liquid strap-on boosters and a cryogenic upper stage. The solid first and liquid second stages are carried over from the PSLV, while the cryogenic upper stage is being supplied by Russia until India has developed an indigenous version. Carrying a 1.5-ton experimental satellite, the GSLV was launched successfully for the first time on April 18, 2001 – an important first step toward India's independence in space and competing in the lucrative geosynchronous market.