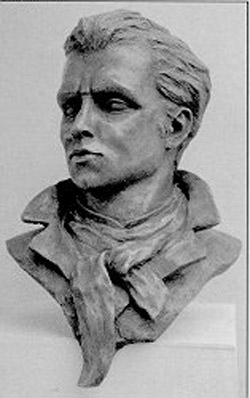 Évariste Galois was a French mathematician who led a short, dramatic life and is often credited with founding modern group theory, though the Italian Paolo Ruffini (1765–1822) came up with many of the ideas first. Galois' work wasn't widely acknowledged by his contemporaries, partly because he didn't present his material very well and partly because he held unpopular political views. In fact, he was a republican revolutionary who was twice imprisoned because of his activities. During his second incarceration he fell in love with the daughter of the prison physician, Stephanie-Felice du Motel, and after being released, fought a gun duel over her with Perscheux d'Herbinville. Mortally wounded in the duel, he was abandoned in a field but found by a peasant and taken to a hospital. After a few days he died of an infection. His death started republican riots and rallies which lasted for several days.

Reputedly, the night before his fatal duel, Galois tried to write down as many thoughts as possible. These notes and a few other papers were discovered 14 years later by Joseph Liouville, who recognized them as works of genius. Galois set out the theory of groups and laid down conditions for the solvability of various algebraic equations.

Galois theory is the study of certain groups, known as Galois groups, that can be associated with polynomial equations. Whether or not the solutions to an equation can be written down using rational functions and square roots, cube roots, etc., depends on certain group-theoretic properties of Galois groups.