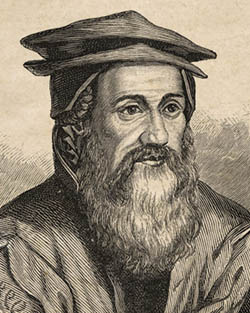 Konrad von Gesner was a Swiss naturalist, born at Zurich, whose major work, Historia Animalium (4 volumes, 1551–58), an encyclopedic study of many varieties of animals, is considered the foundation stone of modern zoology. Unique to its time, the book included not only Greek and Biblical descriptions of animals, but also information Gesner had gained from dissection. Like many of his contemporaries, Gesner had some unusual beliefs. He thought that basilisks and dragons existed, and he catalogued their medicinal uses alongside those of their reptilian cousin, the snake. Gesner wrote, for instance, about the efficacy of dragon fat in treating "creeping ulcers" and that of viper's flesh in theriac, a supposed poison antidote and cure-all commonly used until the late nineteenth century.

Gesner studied medicine, natural history, and Greek and Latin literature at Zurich, Strasbourg, Bourges, and Paris. Returning home in 1535, he earned his living by teaching, until in 1537 he was appointed professor of Greek at Lausanne. This chair, however, he exchanged for that of physics and natural history at Zurich, where he taught and practised as a physician until his death. He was also a prolific writer and published 72 works, besides leaving at his death 18 others in progress. His Bibliotheca Universalis (1545) contained the titles of all the books then known in Hebrew, Greek, and Latin, unpublished as well as published, with criticisms and summaries of each; its second part, Pandetarum sive Partitionum Universalium Libri XXI, came out in 1548–49. His next undertaking, by far the greatest of his literary works, was the Historia Animalium (1551–58). The first deals with viviparous quadrupeds, the second oviparous animals (tortoises, lizards, etc), the third birds, and the fourth fishes and aquatic animals. Two other books, never completed, were to have contained the natural history of snakes and insects. In this work, he aimed at bringing together everything that was known in his time about every animal. But botany was probably the section of natural history with which he had the greatest practical acquaintance. He had collected more than 500 plants undescribed by the ancients, and was arranging the results of his work in this area for a third magnum opus at the time of his death. He also wrote on medicine, mineralogy, and philology.