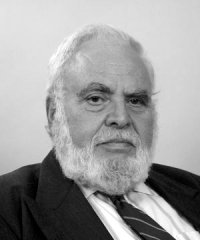 Solomon Golomb was a mathematician and electrical engineer at the University of Southern California who is best known for his seminal studies of polyominos. His article "Checker Boards and Polyominos," published in the American Mathematical Monthly in 1954 when Golomb was a 22-year-old graduate student at Harvard, defined a polyomino as a simply-connected set of squares (that is, a set of squares joined along their edges.) Golomb also originated the idea of graceful graphs.