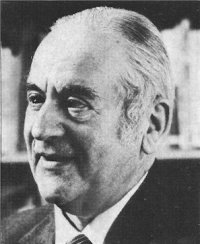 Samuel Goudsmit was a Dutch-American physicist at the Brookhaven National Laboratory who, together with George Ühlenbeck, first proposed (1925) that subatomic particles have the property of spin. Goudsmit obtained his PhD from the University of Leiden in 1927. While still a student, he and Uhlenbeck explained an experiment involving the splitting of a beam of silver atoms into two streams by a magnetic field (the Stern-Gerlach experiment) by suggesting that the silver atoms have an intrinsic spin (up or down). They argued that this is because electrons have spin, and since there are an odd number of electrons in a silver atom (47), all but one of the electron spins cancel each other out (23 up and 23 down), leaving one unit of spin to provide a means by which the magnetic field could exert an effect on the silver atoms.

After obtaining his doctorate, Goudsmit emigrated to the United States, where he worked at the University of Michigan and became professor of physics in 1932; he held the equivalent post at Northwestern University from 1946 to 1948. He worked on radar during World War II and headed a scientific mission to Germany in 1944 to assess the progress of German scientists toward making an atomic bomb. From 1948 to 1970, when he retired, he worked at the Brookhaven National Laboratory. Goudsmit was among the distinguished group of scientists which comprised the 1952 Scientific Advisory Panel on Unidentified Flying Objects. He edited the Physical Review from 1951 to 1962, and founded Physical Review Letters in 1958.