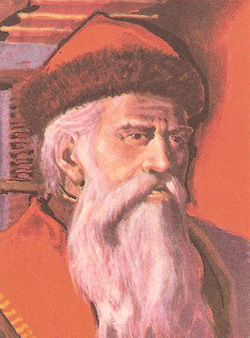 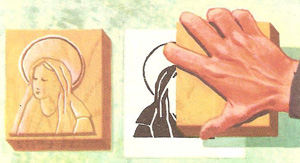 Gutenberg was known as the 'father of printing', but this is not true, because he did not actually invent printing. What he did do was invent the process of printing from movable types. Printing was in fact many centuries old by the time of Gutenberg, and one of its earliest forms was the use of seals and wooden blocks.

In this process, the picture was painted onto wood and the unwanted parts cut out, leaving the outlines in relief. The surface was then coated in watery ink, damp paper laid over it, and the ink transferred by rubbing on the back of the paper with the hand or a burnisher. This process was ideally suited to the reproduction of pictures. In the 11th century a Chinese workman produced movable types of clay. The process was unsuccessful due to the large number of characters in the Chinese language. And then a system called metallography was invented.

Metal punches were carved of the various letters of the alphabet in relief. These raised punches were then pressed into clay, which was baked hard.

A molten alloy of lead and tin was next poured over the matrix (the hardened clay containing the impressions of the letters). When the metal cooled it was separated from the matrix, giving a plate with the letters in relief.

These metal plates were then used for printing, However, the results were never very good, because it proved quite difficult in practice to press the punches evenly into the clay matrix, so the impression was uneven.

The invention of the movable types revolutionized printing. Errors could be corrected and the letters used again and again. A separate metal matrix was used for each letter, from which many identical types could be cast.

Johann Gutenberg was a German printer and goldsmith, usually considered the inventor of printing from separately cast metal types. He experimented with printing in the 1430s and by 1450 he had a press in Mainz, financed by Johann Fust (c. 1400–1466). In 1455 he handed over the press (and his invention) to Fust in repayment of debts. By now the Gutenberg (or Mainz) Bible was at least well under way: each page has two columns of 42 lines.

There are many details of Gutenberg's life and career which we do not know. This lack of information is further complicated by the inventors failure to date or sign his works. But let's consider some of the facts and theories generally accepted by scholars.

Gutenberg was born in Mainz, Germany. Early in his life there was an uprising in Mainz and his family was apparently forced to move to Strasbourg. In 1438 he entered into partnership with three other men with the object of 'exploiting new ideas'. In return for financial support, Gutenberg was to instruct his partners in 'new arts'. One of them, Andreas Dritzehn, died shortly after the formation of the partnership. His heirs brought a court action against Gutenberg in an attempt to force him to repay them some of the money invested or to accept them as partners in Dritzehn's place. However, the court decided in favour of Gutenberg. In records of the court proceedings, one of the witnesses used the word drucken: from this it is usually assumed that the art of printing was really the object of the partnership. Fragments of a poem and an astronomical calendar which are preserved are believed to have been printed in this period. According to astronomers, the calendar was for the year 1448. If this is correct it would mean that the printing from movable types was invented in 1447, or before.

About this time Gutenberg borrowed large sums of money, principally from a Mainz lawyer named Johann Fust. The reason for these loans was to enable him to print a Bible. Right from the start he was in financial difficulties and after printing the first ten pages he tried to reduce the cost of the paper by using 42 instead of 40 lines of type per page. In 1455, before the great work was completed, Fust sued for repayment of the loans. What was his purpose? It is sometimes thought that he wanted to take over the press and the nearly completed Bibles. If so, he was successful, because with the aid of one of Gutenberg's assistants, Peter Schoeffer, Fust set up his own press, finished the printing and sold the Bibles.

It is believed that Gutenberg managed to save some of his possessions from this lawsuit and started again by printing a Bible with 36 lines to the page and a Catholicon (a kind of vocabulary). After 1460 he seems to have abandoned printing, and in 1465 he received a pension from archbishop Adolph of Mainz.