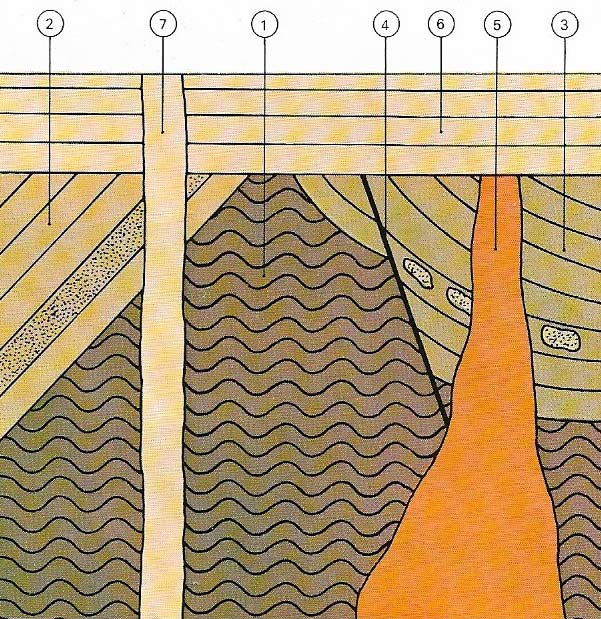 Fig 1. The relative ages of rock structures can be understood from clues in the rocks. In this cross-section the oldest formation is of metamorphic basement rock (1). It was tilted and heavily eroded before being buried by a sedimentary sequence (2) that in turn weathered and was buried by a later sequence (3), shown by fragments of 2 found in 3. Tectonic activity caused caused a fault (4) to displace earlier rock (3 and 1) followed by an intrusion of magma (5). Erosion, followed by a sea inundation, deposited a new layer (6). The most recent structure is an igneous intrusion (7) to the land's surface. 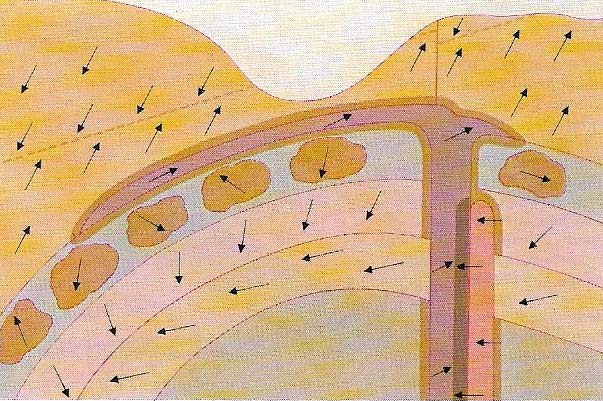 Fig 2. The Earth's magnetic field is a useful tool for dating rocks. When a rock is formed, magnetic particles in it align themselves in the direction of the Earth's lines of magnetic force acting at the time. If the changes in direction and position of the lines of force are established the ages of the rocks of an undisturbed sequence can be determined by investigation of their magnetic alignment. If the rocks have been disturbed the variations in their alignments indicate the nature of the movements involved. The complex history of the example shown can be interpreted by a study of the alignments of the magnetic particles. 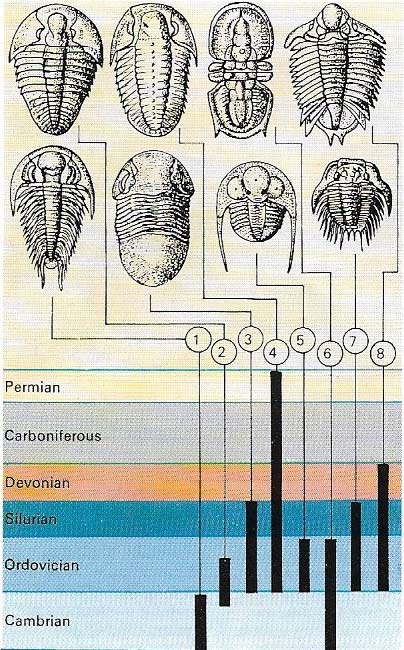 Fig 4. The age of the Earth is some 4.6 billion years, although only the last 570 million years show an abundance of plant and animal life. The most widely found fossil remains from any specific period are called index fossils and are used to correlate various rock formations of the same age. Mountain building took place mostly during specific periods in the geological time scale. 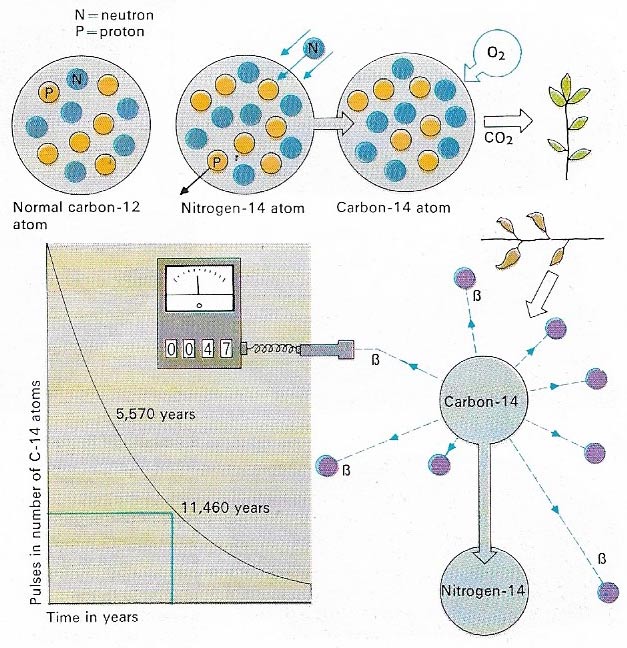 Fig 5. Radiocarbon dating is typical of he techniques that use radioactive decay to estimate age. Carbon (C) possesses two isotopes, C-14, which is radioactive, formed by cosmic ray bombardment of nitrogen-14 (N-14), and C-12 which is not. The C-14 combines with oxygen to form carbon dioxide which is absorbed by living organisms. A constant ratio of C-14 to C-12 is established in each organism during its life. After death no more carbon dioxide is absorbed and the C-14 decays steadily, by emitting beta particles, to N-14, failing to half its original quantity every 5,570 years. The age of organic remains can be estimated by comparing the ratio of C-14 to C-12 in them.

In the mid-seventeenth century, Archbishop James Ussher (1581–1656) of Ireland reached the conclusion that the Earth was created at precisely 9am on October 23, 4004 BC. His findings were arrived at after diligent study of religious texts. Not until well into the nineteenth century did efforts to establish both absolute and relative techniques of geological dating meet with any semblance of success. In 1897, the British physicist William Kelvin (1824–1907) attempted to deduce the Earth's age from the temperature difference between the young molten planet and its present state, assuming that the rate of heat loss was constant. His estimate of 20–40 million years was more than a hundred times lower than current estimates. Radioactivity was then unknown, so Kelvin failed to take into account the fierce heat generated by the decay of radioactive elements with the Earth.


The law of superposition

Although early efforts to find an absolute dating system repeatedly failed, a relative time scale proved far easier to develop. Such a system merely seeks to establish the order in which rocks were laid down (1). It does not make any reference to fixed units of time. The entire sequence of rocks deposited since the beginning of Earth's history is known as the geological column. Once the law of superposition (which states that in strata which have remained undisturbed since deposition older rocks lay beneath younger ones) had been elucidated by William Smith (1769–1839), late in the eighteenth century, piecing together the geological column was simply a long, arduous task of identifying and correlating rocks and slotting them into their appropriate order in the stratigraphic sequence. The entire column was subdivided into units based on events that were taken to be natural breaks between one geological era and the next. The major divisions, therefore, are of widely differing lengths of time (5).

The correlation of rock strata was made easier by observing the fossils they contained. Organisms of any particular time in history possess quite distinct characteristics that can be used to identify the widely scattered rocks in which these fossils occur(3). Strata containing similar fossil assemblages can be assumed to have been deposited during the same period of geological history.


The search for absolute dating

The breakthrough to an absolute time scale was finally achieved with the discovery that radioactive decay proceeds at a constant pace. In 1907, a chemist at Yale University, Bertram Boltwood (1870–1927) found that the decay of radioactive materials could be thought of as a convenient yardstick of time. He recognized the regular relationship that existed between decay products and their parent elements and that progressively older specimens possessed increasing amounts of stable end products (8).

The most useful concept in radiological chronology is the notion of a half-life, the time it takes for half a given amount of material to decompose, or decay, into radiogenic products. The half-life of uranum-238, for example, is 4.51 billion years. After a lapse of this time, only half an original given quantity of uranium remains, the rest having been transformed into a series of radioactive isotopes, eventually decaying to the lead isotope Pb-206. Thorium-232 has an even longer half-life, of some 14.1 billion years, while that of carbon-14 is of only 5,570 years.

The age of a rock specimen is arrived at by comparing the ratio of decay elements to the remaining amount of parent material. The known half-life of the element in question is then used to calculate the sample's age. This technique has only become reliable since the 1950s when mass spectrometers, instruments that can analyze and measure elements in quantities of only a few millionths of a gram, were developed.

The process of decay is extremely complex. The disintegration of unstable nuclei is spontaneous and is unaffected by surrounding physical or chemical conditions. This is one of the only processes on Earth that can be assumed to have had a constant rate for the measurement of absolute age.

Absolute dating established the age of a specimen from the time it crystallized into a mineral, not the age of the element itself. Once a crystal has crystallized, chemical composition is fixed. The decay products within it are the result of the disintegration of a radioactive parent element.


Finding the age of the Earth

Uranium, and its close cousin thorium, are not the only elements that are suitable for absolute dating. Potassium-40 with a half-life of 1.3 billion years, occurs throughout the Earth's crust in measurable quantities. It decays into argon-40, an inert gas found in the atmosphere. A comparison of the ratio of these two elements in the crust and air yield a figure of some 4.6 billion years for the age of the Earth. The oldest rocks of the great Precambrian shields of North America Greenland, Africa, and Australia yield dates of up to 3.5 billion years. The discrepancy between the two figures is perfectly plausible since a long cooling period must be allowed for before any major rock systems could have formed a crust. Despite all these up-to-date techniques, many rocks cannot be dated absolutely.