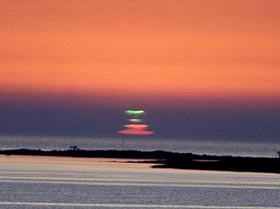 The green flash is a rare optical effect in which the tip of the Sun's disk suddenly and briefly changes to a vivid green, either as the last remnant of the setting Sun vanishes or just at the moment of sunrise. Caused by the preferential refraction of light, it requires a distant, sharply-defined low horizon (preferably the sea) and special atmospheric conditions, including cool weather. The period of visibility tends to increase in summer months with increasing latitude, i.e. as the angle of descent of the Sun decreases. In the Antarctic, it has been observed for as long as 30 minutes. Occasionally it takes the form of a white flash followed by a deep blue one. A similar phenomenon, the red flash, is sometimes seen as the lower edge of the Sun emerges from a dark cloud near the horizon.