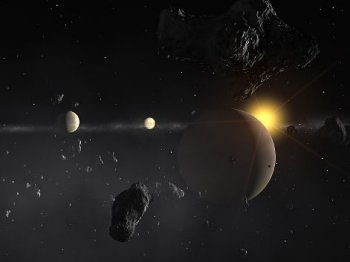 HD 69830 is a Sunlike star in the constellation Puppis around which have been found three Neptune-mass planets and a dusty disk that appears to be an asteroid belt. The planetary system of HD 69830 is the first to be discovered that does not contain a Jupiter-class planet.

The planets around HD 69830 have masses of at least 10 to 18 times the mass of the Earth. Theoretical simulations suggest an essentially rocky composition for the inner planet, and a rocky/gas structure for the middle one. The outer planet has probably accreted some ice during its formation, and is likely to be made of a rocky/icy core surrounded by a massive envelope. Further calculations have also shown that the system is in a dynamically stable configuration. The outer planet also appears to be located near the inner edge of the habitable zone, where liquid water can exist at the surface of rocky/icy bodies. Although this planet is probably not Earth-like due to its heavy mass, its discovery is exciting to both planetary astronomers and astrobiologists.

The trio of Neptune-mass planets around HD 69830 were found by a team of European astronomers using the HARPS spectrograph on ESO's 3.6-m telescope at La Silla, Chile. The discovery was announced in 2006.1

In 2005, the Spitzer Space Telescope detected dust in the HD 69830 system consistent with the existence of an asteroid belt 20 times more massive than that in our own system lying inside an orbit similar to that of Venus.2 The belt would be so luminous that the nights on any nearby planets would be lit up by zodiacal light 1000 times brighter than that seen on Earth, easily outshining the Milky Way.

Alternatively, the detected dust could be caused by the evaporation of a Pluto-sized comet gravitationally perturbed into a close orbit around its star. Indeed, the dust chemistry, which includes a form of olivine called forsterite, is strikingly similar to that of Comet Hale-Bopp. However, the odds that Spitzer happened to detect a supercomet spiraling in towards its star, a rare event of short duration, are slim.