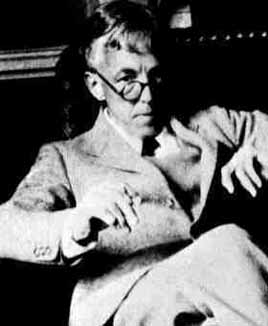 G. H. Hardy was one of the most prominent English mathematicians of the twentieth century; his legendary collaboration with John Littlewood lasted 35 years and produced nearly 100 papers. Hardy was a precocious child, whose tricks include factorizing hymn numbers during sermons. In 1919 he became Savilian Professor of Geometry at Oxford but returned to Cambridge in 1931 as professor of pure mathematics. His work was mainly in analysis and number theory.

Hardy had only one other passion in his life – the game of cricket. His daily routine would begin with reading The Times and studying the cricket scores over breakfast. Then he would do mathematical research from 9 o'clock till 1 o'clock. After a light lunch, he would walk down to the university cricket ground to watch a game. In the late afternoon he would walk slowly back to his rooms in College, and take dinner followed by a glass of wine. Hardy was known for his eccentricities. He couldn't stand having his photo taken and only five snapshots of him are known to exist. He also hated mirrors and his first action on entering any hotel room was to cover any mirror with a towel.

Hardy's book A Mathematician's Apology (1940)1 is one of the most vivid descriptions of how a mathematician thinks and the pleasure of mathematics. But the book is more, as C. P. Snow writes:

A Mathematician's Apology is ... a book of haunting sadness. Yes, it is witty and sharp with intellectual high spirits: yes, the crystalline clarity and candor are still there: yes, it is the testament of a creative artist. But it is also, in an understated stoical fashion, a passionate lament for creative powers that used to be and that will never come again. I know nothing like it in the language: partly because most people with the literary gift to express such a lament don't come to feel it: it is very rare for a writer to realize, with the finality of truth, that he is absolutely finished.