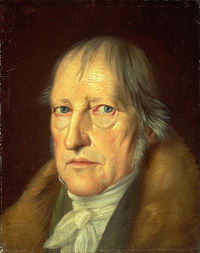 Georg Hegel was a German philosopher of idealism who had an immense influence on nineteenth- and twentieth-century thought and history. During is life Hegel was famous for his professorial lectures at the University of Berlin and he wrote on logic, ethics, history, religion, and aesthetics. The main feature of Hegel's philosophy was the dialectic method by which an idea (thesis) was challenged by its opposite (antithesis) and the two ultimately reconciled in a third idea (synthesis) which subsumed both. Hegel found this method both in the workings of the mind, as a logical procedure, and in the workings of the history of the world, which to Hegel was the process of the development and realization of the World Spirit (Weltgeist).

His anthropocentric philosophy, in which he held that the Earth is the best of all possible worlds, led him to oppose pluralism.

Hegel's chief works were Phenomenology of the Mind (1807) and Philosophy of Right (1821). His most important follower was Karl Marx.