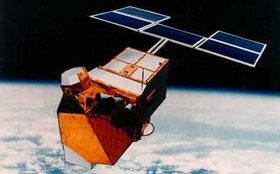 Helios are advanced French optical military reconnaissance satellites based on SPOT 4. The Missile and Space Directorate (DME) of the French armament agency (DGA) heads the overall Helios program, which is funded by France, Spain, and Italy. The imaging system uses 4,096 × 2,048 pixel linear CCDs (charge-coupled devices) to provide images with 1-5 m resolution. Helios-1B suffered a breakdown of its power supply system and could no longer function after operating for just under its 5-yr nominal life expectancy. It was reported in October 2004 that Helios 1B had been deorbited. Helios 1A continues to operate.