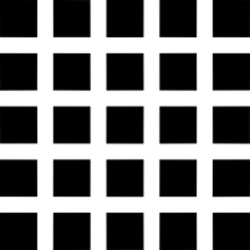 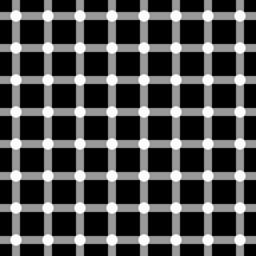 The Hermann grid illusion is an optical illusion first described by the German physiologist Ludimar Hermann (1838–1914) in 1870. While reading a book on sound by the Irish physicist John Tyndall, Hermann saw gray spots in the intersections of spaces among the figures that Tyndall had arranged in a matrix. Despite the fact that the same intensity of light is reflected all the way along the white spaces in the Hermann grid, the intersections appear gray. To explain this, consider two regions of the retina. One region views an intersection of a white horizontal and vertical band, while the other views a white band between two intersections (the region going away from the intersection). Although the two regions themselves receive the same amount of light, the situation in their neighboring regions is different. At the intersection, light comes in from all four sides, but the white band that lies between the two intersections is surrounded by two dark sides. This leads to an effect called lateral inhibition, which causes a bright surround to an area appear darker and, conversely, a dark surround to an area appear lighter.

A similar but more powerful illusion, known as the Lingelbach illusion or the scintillating grid illusion, was discovered in 1994 by Elke Lingelbach, the wife of a German mathematics professor, and has not yet been fully explained.1 Curiously, the effect of the scintillation is lessened by tilting the head through 45°!