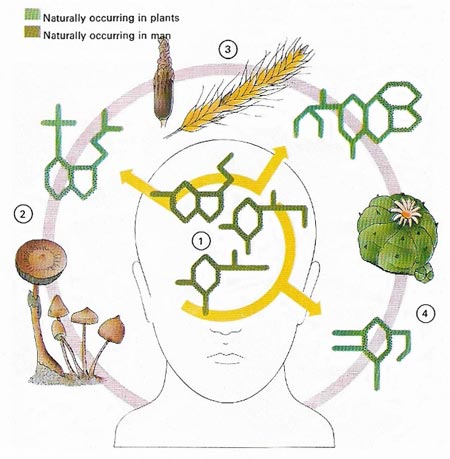 The hallucinogenic drugs may produce their effects because they are similar structurally to substances (1) that are neurochemical transmitters. Three of the most common naturally occurring hallucinogenic substances are psilocybin, LSD, and mescaline. Psilocybin (2) is extracted from from the psilocybe family of mushrooms. LSD (3) is a highly potent hallucinogen used extensively for therapy by some psychiatrists, was first isolated from a fungus, Claviceps purpurea, which causes ergot of rye. Mescaline (4), which has played an important role in the religious rituals of certain Mexican Indian tribes, is obtained from the peyote cactus.

A hallucinogenic drug is a drug that causes hallucinations or illusions, usually visual, together with personality and behavior changes. The last may arise as a result of therapy, but more usually follow deliberate exposure to certain drugs for their psychological effects ("trip"). Lysergic acid diethylamide (LSD), heroin, morphine, and other opium narcotics, mescaline, and psilocybin are commonly hallucinogenic and cannabis sometimes so. The type of hallucination is not predictable and many are unpleasant ("bad trip"). Recurrent hallucinations may follow use of these drugs; another danger is that altered behavior may inadvertently cause injury or death. Although psychosis may be a result of their use, it may be that recourse to drugs represents rather an early symptom of schizophrenia.