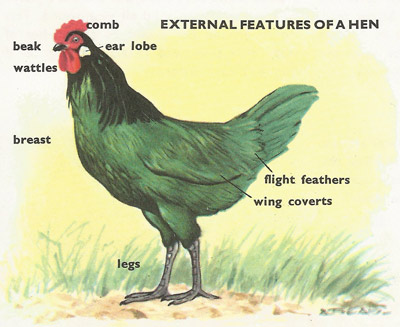 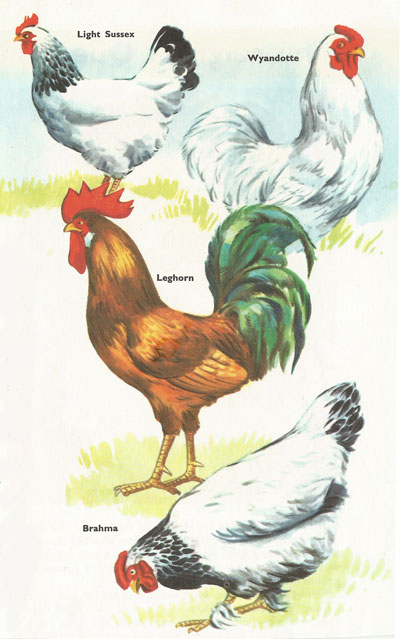 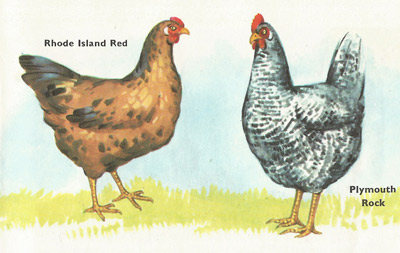 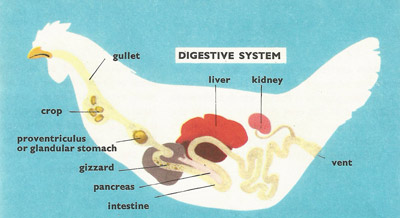 Wings, feet, and legs of a hen. 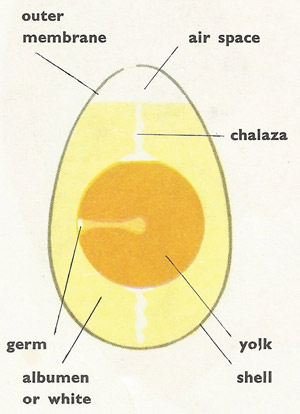 Parts of a hen's egg.

Chickens are the most familiar of all domestic animals. Most people who live in the country keep a few hens, both for eggs and their meat.

Healthy chickens are restless creatures, never still except at night when they sleep; all day they are scratching about for food, dusting to rid themselves of insects, drinking from puddles, chasing and pecking each other.

Among them proudly struts the cock; he is bigger than the hens, brighter colored, with a higher comb and spurs on his legs with which he will fight a rival to the death. His crow is a shout of defiance, to warn other cocks that these hens have a mate already. Hens may live for six or seven years.

The ancestor of all domestic fowls is the Jungle Fowl (Gallus gallus), which inhabits most of the warmer parts of eastern Asia. They are commonest in fairly dry forest or hilly country, and live in small flocks, a cock and several hens. The cock jungle fowl is a beautiful bird, all copper and gold with shining dark green tail and wing coverts. The hen has barred brown plumage; sitting on her nest on the ground, under a bush or in a bamboo thicket, she is almost invisible. Jungle fowl fly fast and straight like a pheasant and are very wary and difficult to approach.

As might be supposed, chickens were first domesticated in Asia, possibly in the valley of the Indus about 3,000 BC. From there they were brought to Persia and Egypt, and reached Europe about the 4th century BC. After that they spread rapidly, but the classification into numerous different breeds is quite recent, perhaps 200 years old.

Here are a few of the more popular and important breeds:

Leghorns are of Italian origin and are amongst the best of all poultry if eggs are wanted; the meat is not especially good. There are several varieties, white, black and brown, but all are slender graceful birds with a large comb, which hangs over to one side in the hens.

Wyandottes are excellent all-round utility birds, good layers and large enough to be suitable for the table. The white variety is the most usually seen.

Rhode Island Reds are among the most popular heavier breeds, good layers, good table birds and of very handsome appearance.

Plymouth Rocks are of American origin, large and handsome with their finely barred plumage.

Dorkings are an old English breed, excellent for the table (they may weigh 15 lb) but poor layers. Most fowls have four toes but Dorkings have five.


The hen feeds mostly on grain which she swallows whole; indeed she has no alternative as there are no teeth in her beak.

Digestion is carried out progressively in three compartments which form the stomach. First it goes into the crop, where it is softened by certain secretions. In the proventriculus it is attacked by gastric juices and further softened. The gizzard has thick muscular walls and contains a quantity of grit, which the hen has swallowed. Powerful movements of the walls grind the food up and complete the digestive process.

A hen's wings are short and round and not adequate to keep the bird air-borne for long. The domestic fowl is not a flying bird.

Like all other birds the hen can perch for a long time without feeling tired; indeed that is the position in which she sleeps. In this position she not only feels no fatigue, but cannot fall. The reason is that there are long tendons, attached to the muscles of her toes and running round the heel and right up the back of her leg. When she crouches her leg-joints bend, stretching the tendons and automatically closing the grip of her toes. You can prove this by bending and straightening h hen's leg; the toes grip and slacken as you do it.

This is also the reason why a hen's toes close up when she lifts (i.e. bends) her leg in walking.


Parts of an egg

The shell has a smooth surface. It consists of calcium carbonate and phosphate (98%) and organic matter (2%). It is perforated by countless tiny pores which admit air for the embryo to breathe.

The white is a viscous solution of water and albumen. The yolk or yellow consists of fats which provide food for the growing embryo.

The chalazae are little twisted cords which keep the yolk suspended in the middle of the egg.

The air space is a little open space between the outer membrane and the shell. It is full of air and increases in size as the egg develops. This is made possible by evaporation through the shell of part of the water in the egg.


Facts about the egg

From commencement of incubation to hatching of the chick takes 21 days. 104°F is the temperature needed for development of the embryo. 8 months (from Feb to Nov) is the normal laying period.