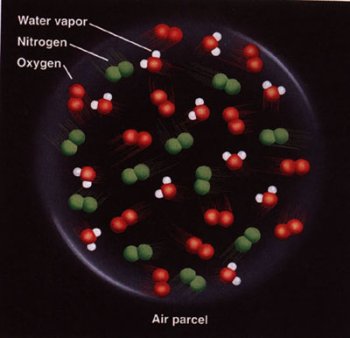 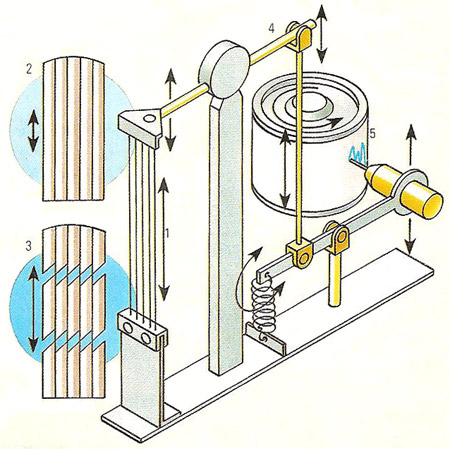 Fig 2. A hair hygrometer uses a bundle of human hair, or from the hair of certain varieties of goat, to measure the relative humidity. As the amount of water vapor in the air changes, the length of the bundle of hair (1) increases (2) or decreases (3) and this movement is amplified by a series of levers (4) to which the bundle is attached and recorded on a moving roll of paper (5).

Humidity is the amount of water vapor in the air, measured as mass of water per unit volume or mass of air, or as a percentage of the maximum amount the air would support without condensation, or indirectly via the dew point. Saturation of the air occurs when the water vapor pressure reaches the vapor pressure of liquid water at the temperature concerned; this rises rapidly with temperature. The physiologically tolerable humidity level falls rapidly with temperature, as humidity inhibits cooling by evaporation of sweat.

Humidity can be expressed in different ways.

Relative humidity is the amount of water vapour present in air expressed as a percentage of the amount needed for saturation at the same temperature. f the air is gradually cooled while maintaining the moisture content constant, the relative humidity will rise until it reaches 100%. This temperature, at which the moisture content in the air will saturate the air, is called the dew point.

Specific humidity is the ratio of the mass of water vapor in air to the total mass of the mixture of air and water vapor.

Saturation deficit is the amount by which the water vapor in the air must be increased to achieve saturation without changing the environmental temperature and pressure.

Humidity can be measured with a hygrometer. Usually, hygrometers measure relative humidity, i.e., the amount of moisture in the atmosphere as a percentage of the saturation level at that temperature and pressure.

The hair hygrometer (Fig 2), though of limited accuracy, is common. The length of a hair increases with increase in relative humidity. This length change is amplified by a lever and registered by a needle on a dial.

The wet and dry bulb hygrometer (psychrometer) has two thermometers mounted side by side, the bulb of one covered by a damp cloth. Air is moved across the apparatus (e.g., by a fan) and evaporation of water from the cloth draws latent heat from the bulb. Comparison of the two temperatures, and the use of tables, gives the relative humidity.

The dew point hygrometer comprises a polished container cooled until the dew point is reached; this temperature gives a measure of relative humidity.

The electric hygrometer measures changes in the electrical resistance of a hygroscopic (water-absorbing) strip.