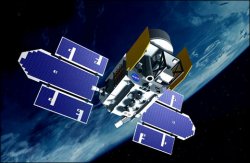 ICESat (Ice, Cloud, and Land Elevation Satellite) is a NASA satellite designed to accurately measure the elevations of Earth's ice sheets, clouds, and land, and help answer fundamental questions about the growth or retreat of Earth's polar ice sheets and future global sea level changes. ICESat also measures the heights of clouds for studies of Earth's temperature balance, and measure land topography for a variety of scientific and potential commercial applications. Its primary instrument is a laser altimeter, developed at the Goddard Space Flight Center, which works by transmitting short pulses of infrared light and visible-green light. The distance from the spacecraft to clouds and to Earth's surface is determined from measurements of the time taken for the laser pulses to travel to and from these targets. Formerly known as EOS Laser Alt-1, ICESat is part of NASA's EOS (Earth Observation System). It was launched on January 13, 2003, from Vandenberg Air Force Base, into a 606-km-high orbit with an inclination of 94°. Its primary laser, one of three lasers onboard, failed because of a design flaw just 36 days after being turned on. However, ICESat is now operational and returning valuable data.