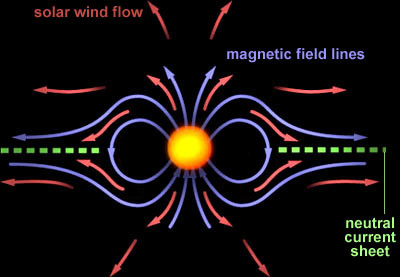 The solar magnetic field and IMF seen along the solar equatorial plane. 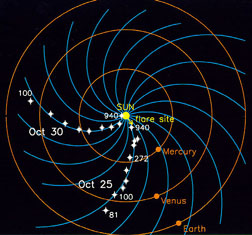 The spiral nature of the IMF, seen from above, is shown by the blue arcs. Image credit: NASA.

The interplanetary magnetic field lines are effectively frozen in to the solar wind plasma; accordingly, because of the Sun's rotation, the IMF, like the solar wind, travels outward in a spiral pattern like the pattern of water sprayed from a rotating lawn sprinkler (see diagram below).

The IMF originates in regions on the Sun where the magnetic field is open – where field lines emerging from one region do not return to a conjugate region but extend virtually indefinitely into space. The polarity, or direction, of the field in the Sun's northern hemisphere is opposite that of the field in the southern hemisphere. (The polarities reverse with each solar cycle.)

Along the plane of the Sun's magnetic equator, the oppositely directed open field lines run parallel to each other and are separated by a thin current sheet known as the interplanetary current sheet, or heliospheric current sheet (see diagram above right). The current sheet is tilted, because of an offset between the Sun's rotational and magnetic axes, and warped, because of a quadrupole moment in the solar magnetic field, and thus has a wavy structure as it extends into interplanetary space. Because the Earth is located sometimes above and sometimes below the rotating current sheet, it experiences regular, periodic changes in the polarity of the IMF. These periods of alternating positive (away from the Sun) and negative (toward the Sun) polarity are known as magnetic sectors.