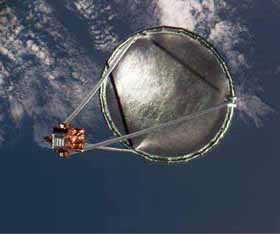 The Inflatable Antenna Experiment (IAE) is a large antenna, carried aboard the Space Shuttle, deployed on the Spartan 207 platform, then inflated in orbit. This experiment laid the groundwork for future inflatable structures in space such as telescopes and satellite antennas. IAE was developed by L'Garde, Inc. of Tustin, California, a small aerospace firm, under contract to JPL (Jet Propulsion Laboratory). Once in low Earth orbit, the Spartan served as a platform for the antenna which, when inflated, was about the size of a tennis court. First the IAE struts were inflated, followed by the reflector canopy. High-resolution video photography recorded the shape and smoothness of the reflector surface over a single orbit. Finally the antenna was jettisoned from the Spartan platform and disintegrated as it fell through the atmosphere