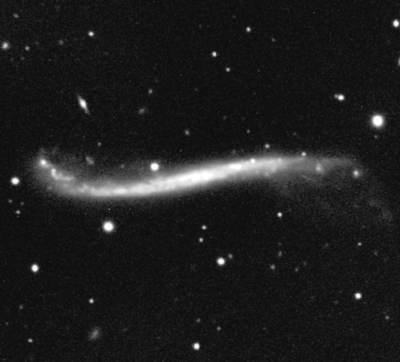 The Integral Sign Galaxy (UGC 3697) is a very thin, faint, edge-on spiral galaxy in the constellation Camelopardalis. Its distinctive shape helps dispel any notion that there's no link between astronomy an mathematics! The Integral Sign Galaxy (Uppsala 3697) is an example of a "super-thin galaxy" – a term devised by Goad and Roberts in the 1980 for edge-on galaxies with with an axial ratio of 8:1 or more, and other peculiarities such as a lack of central bulge. Just 8' SE (perhaps 39 kpc in linear distance) lies another a bright galaxy, gravitational interaction with which might be the cause of the Integral Sign's warped-disk.