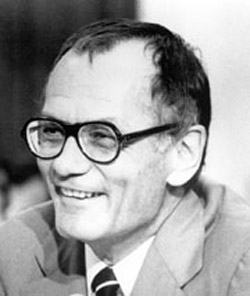 Robert Jastrow was a distinguished American space scientist. Jastrow earned a PhD in theoretical physics from Columbia in 1948 and carried out further research at the Institute for Advanced Studies, Princeton, and the University of California, Berkeley, before becoming an assistant professor at Yale (1953–54). He then served on the staff at the Naval Research Laboratory (1954–58) before being appointed chief of the theoretical division of the Goddard Space Flight Center, and then director of the Goddard Institute of Space Studies in 1961, a post he held for 20 years. Subsequently he was appointed professor of earth sciences at Dartmouth. Jastrow's work has ranged across nuclear physics, plasma physics, geophysics, and the physics of the Moon and terrestrial planets.