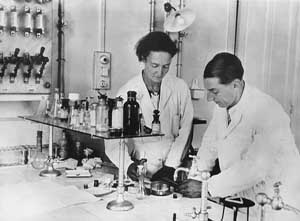 Irène Joliot-Curie was a French physicist, the daughter of Pierre and Marie Curie. She and her husband Jean Frédérick Joliot (1900–1958), shared the 1935 Nobel Prize in Chemistry for their discovery of artificial radioactivity. For example, in their joint research they discovered that aluminium atoms exposed to alpha particles transmuted to radioactive phosphorus atoms. Both later played a major part in the formation of the French atomic energy commission but, because of their communism, were removed from positions of responsibility there. Like her mother, Irène died from leukemia as a result of prolonged exposure to radioactive materials.