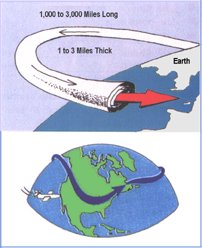 The jet stream is a comparatively narrow current of air that moves around the northern and southern hemispheres of Earth in wavelike patterns. It can be likened to a river of wind moving at high speed. The jet stream varies from about 100 to 400 mi (161 to 644 km) wide and 1 to 3 mi (1.6 to 4.8 km) thick. Its strongest winds are generally encountered at about 30,000 ft (9,144 m) in altitude – in the troposphere. Jet-stream winds usually have a speed of 150 to 300 mph (241 to 482 kph), but speeds up to 450 mph (724 kph) have been recorded. Its general motion is from west to east. However, there also is a tropical easterly jet stream, which occurs during summer. This jet stream originates in the upper troposphere near Burma and extends to the west of Africa, some 6,000 mi (10,000 km) to the west. The most extreme differences in temperatures occur where the stream is the narrowest.

The jet stream shifts position frequently and actually migrates with the seasons. Sometimes two streams flow across the United States, one along the northern border and other well toward the south. The cruising range of aircraft flying downwind within a jet stream is greatly increased. Pilots anticipating high-altitude or long-range flights attempt to discover the location of the stream and use it to their advantage.

For several decades, meteorologists have studied jet streams and how they affect the movements of air masses. While the exact relationship is still unknown, meteorologists agree that jet streams may act as a barrier between cold air in the north and warm air in the south. During their meandering, the streams appear to allow some cold air to flow southward and warm air to flow northward. These flows undoubtedly affect the formation of cold and warm air masses.