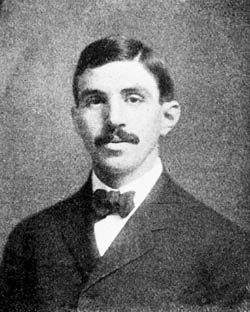 Edward Kasner was an American mathematician at Columbia University best remembered for introducing the words googol and googolplex into the popular mathematical lexicon. He is also well known as the coauthor, with James Newman, of Mathematics and the Imagination, first published in 1940. In a later edition of this (1967), he spoke about the term mathescope, which was coined by the science reporter Wilson Davis after listening to one of Kasner's public lectures. In Kasner's words: "It is not a physical instrument; it is a purely intellectual instrument, the ever-increasing insight which mathematics gives into the fairyland which lies beyond intuition and beyond imagination." His main field of research was differential geometry, which he studied in its applications to mechanics, cartography, and stereographic projections, though he also wrote papers on circle packing and on the horn angle and studied an extension of right triangles to the complex plane.