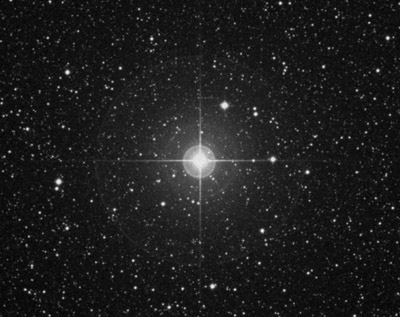 Kaus Australis (Epsilon Sagittarii) is the brightest star in the constellation Sagittarius; it marks the southern (Latin australis) extremity of the Archer's bow (Arabic kaus) and is also the lower right star of the Milk Dipper asterism. Deep in the southern hemisphere, 34° below the celestial equator, the star is not well known to northerners, though it is the 36th brightest star in the sky. It has traditionally been called a giant and assigned to the cool end of B, while others have more recently assigned it to hot-end class A as a bright giant. In any event, the star is much brighter than its main sequence counterparts and is clearly in a more advanced state. It probably has a core of helium that is shrinking and heating as it prepares to fuse to carbon and oxygen. It may also be a sort of shell star in which its high rotation speed (over 70 times that of the Sun) was responsible for creating a shell of gas that hides much of the star within