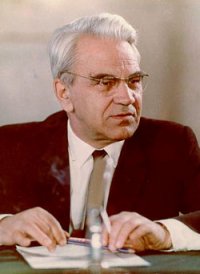 Mstislav Keldysh was the chief theoretician of Soviet astronautics in the 1960s. Keldysh studied physics and mathematics at Moscow University, obtaining his P.D. in 1938. He worked for many years in a variety of positions at the Central Institute of Aerohydrodynamics, Moscow University, and the Steklov Mathematical Institute. In 1960-61 he served as vice president of the Soviet Academy of Sciences, and thereafter as its president until 1975.