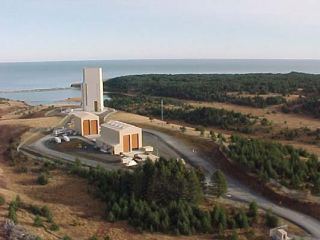 Kodiak Launch Complex is a commercial spaceport at Narrow Cape on Kodiak Island, about 400 km south of Anchorage, Alaska, and 40 km southwest of the city of Kodiak. Kodiak Island is one of the best locations in the world for polar launch operations, providing a wide launch azimuth and unobstructed downrange flight path. Development of the site began in January 1998 by the Alaska Aerospace Development Corporation, a public company formed in 1991 to foster an aerospace industry for the 49th state. The inaugural orbital launch from Kodiak (following three Air Force suborbital launches) of an Athena I carrying four small satellites, PICOSat, PCSat, Sapphire, and Starshine 3, delayed two weeks because of the September 11 terrorist attacks on New York and Washington and then because of a massive solar flare, took place September 29, 2001.