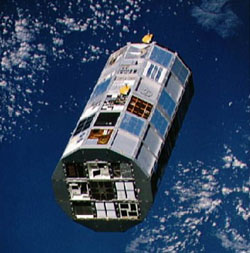 LDEF (Long Duration Exposure Facility) was a package of 57 experiments placed in Earth orbit by the Space Shuttle for studying the effects of exposure to the environment of space. The LDEF was supposed to have been recovered after about one year. However, delays in the Shuttle program meant that the package was not brought back until January 1990, just a few weeks before it would have reentered the atmosphere and been destroyed.

LDEF was designed to provide long-term data on the space environment, including micrometeoroid and radiation bombardment, and its effects on materials and satellite systems (including power, propulsion, and optics), and the survivability of microorganisms in space. The mission's experiments included participation of more than 200 principal investigators from 33 private companies, 21 universities, seven NASA centers, nine Department of Defense laboratories, and eight foreign countries. Its planned retrieval was temporarily postponed in March 1985, and then indefinitely postponed following the Challenger disaster in 1986. Finally, it was brought back to Earth by STS-32 in January 1990. Many of the experiments benefited from their extended stay in space; in particular, it was found that many of the microorganisms onboard had survived, shielded beneath a later or two of dead cells.