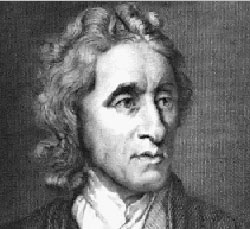 John Locke was an English empiricist philosopher (see empiricism) whose writings helped initiate the European Enlightenment. His Essay Concerning Human Understanding (1690) is one of the highlights of English philosophy. In it he adopted a nominalist view of language, yet believed that our ideas of things, inasmuch as they reflected real essences – the properties of the insensible corpuscles of matter – were founded upon and could be checked against experience. His A Letter Concerning Toleration (1689) and The Reasonableness of Christianity (1695) were seminal in 18th-century British religious thought.

Locke supported the nonanthropocentric teleological argument of pluralism, popular in the Age of Enlightenment, that God created other worlds for the benefit of their inhabitants rather than that of man:1

It is more suitable to the wisdom, power, and greatness of God to think that the fixed stars are all of them suns, with systems of inhabitable planets moving about them, to whose inhabitants he displays the marks of his goodness as well as to us; rather than to imagine that these very remote bodies, so little useful to us, were made only for our own sake.