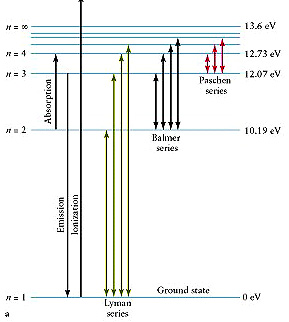 Lyman, Balmer, and Paschen series of the hydrogen atom.

The Lyman series is a series of lines in the hydrogen spectrum associated with transitions to or from the first energy level or ground state. It lies in the ultraviolet (Lyman-alpha at 1215.67 Å; Lyman-beta at 1026 Å) with a series limit is at 912 Å. The He II Lyman lines have almost exactly one-quarter the wavelength of their hydrogen equivalent (He II Lyman-beta, 303.78 Å; He II Lyman limit, 227 Å.)