life in lakes and rivers 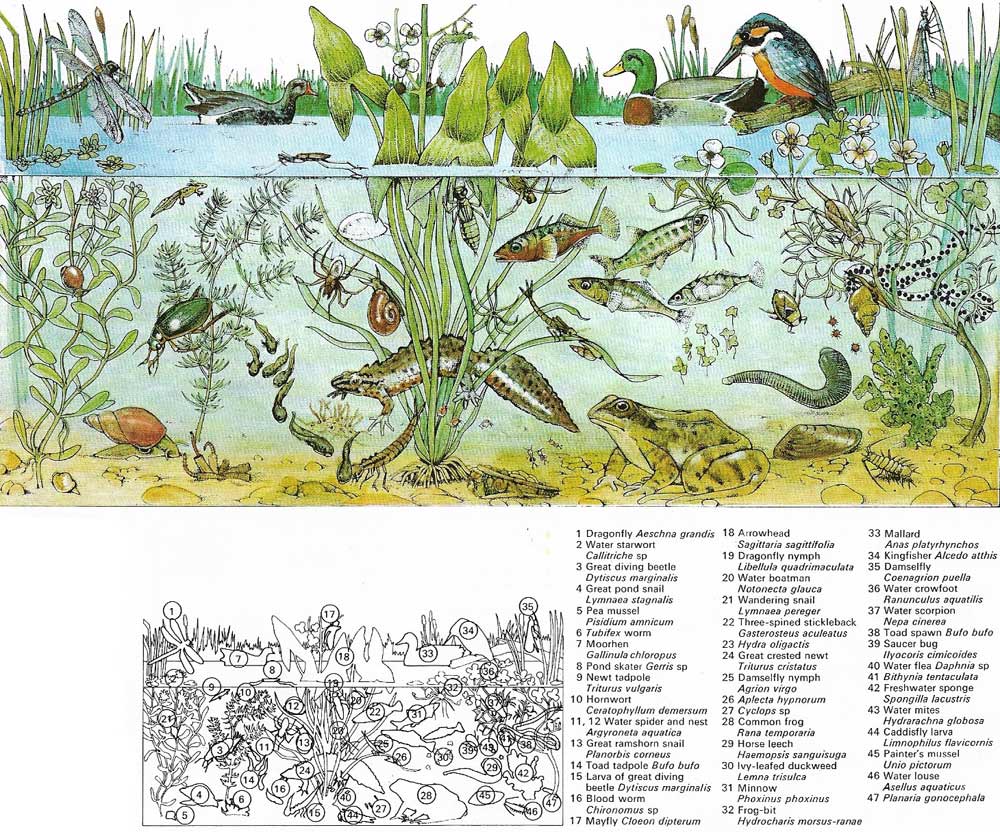 No part of the living space provided by a pond is neglected. Plants root in the muddy bottom or float on the surface. Some animals, such as Tubifex worms or midge larvae, bury themselves in the silt but most are more active, gliding over the mud like the planarians, undulating through the water like the leech or jogging upward like the water fleas. The larvae of pond insects are the foodof newts and fish, which are in turn eaten by birds such as herons. 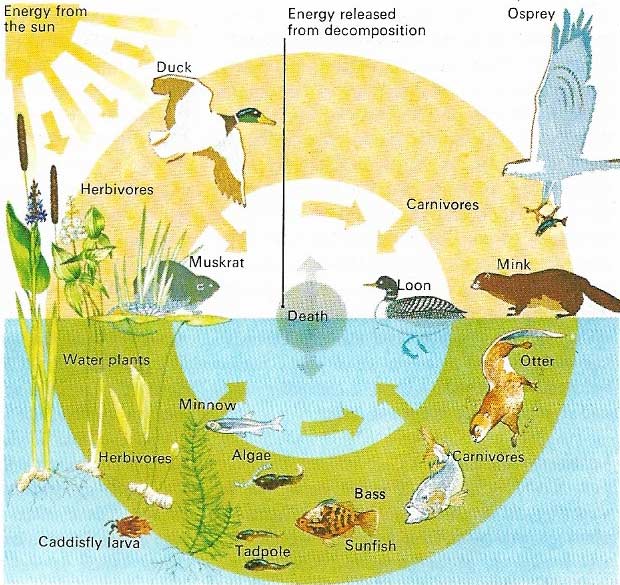 Fig 1. A river, pond, or lake is a largely self-contained microcosm taking energy from the Sun and minerals from the land.

Fig 2. In the upper cascade reach the rush of a mountain torrent is usually unbearable for most animals. The few inhabitants spend only their immature phases here. Some caddis larvae attach themselves to boulders by silk webs to avoid being swept away, while black fly larvae hang on with hooks at the rear end. Some mayfly larvae are streamlined swimmers;those with flattened forms cling firmly to large stones and let the water flow past. 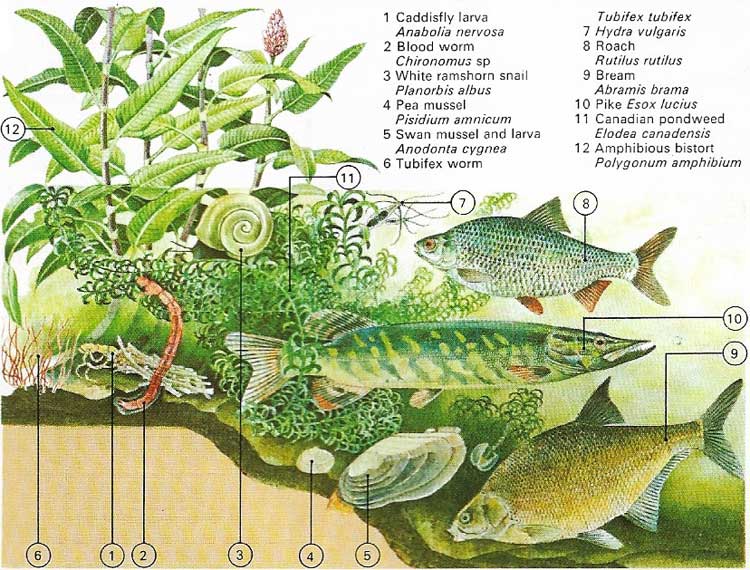 Fig 3. In lower reaches, dense growth such as Canadian pondweed – introduced into Europe where it choked many watercourses like a form of natural pollution – tangles with Potamogeton and amphibious bistort. In the silt bed Tubifex worms and some midge larvae are buried. Their red hemoglobin enables them to use what little oxygen the water contains at this level. A few freshwater dwellers are filter feeders, like the swan mussel and the small related pea mussel. Many more are plant feeders like the ramshorn snail that glides over plants. Caddis larvae, of different species to those of fast streams protect their bodies with cases made of sand grains or vegetable debris, some neatly, some in a higgledy-piggledy manner. Deep-bodied, slow-moving fish such as roach and bream are found here, making a rich living off the wide range of plants and animals in the habitat. In turn, they are preyed on by the fierce, lurking pike. 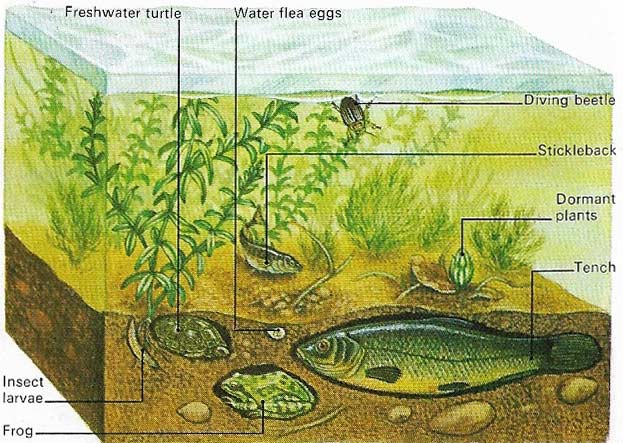 Fig 4. Pond dwellers endure greater changes of living conditions than those of any habitat other than the seashore. The contrast for them is most marked in winter when silk accumulates and the surface freezes over. At this time frogs, fish, and other animals retire to hibernate in the muddy bed of the pond, but those that remain active rarely suffer from an oxygen deficiency. As the ice forms, an air bubble is trapped underneath it and from this sufficient gas diffuses into the water to sustain the creatures living there.

The overwhelming mass of the world's water is oceanic, its freshwater lakes and rivers covering a minute area by comparison. However, fresh waters provide a wide variety of habitats and these are occupied by a diverse selection of specialized plants and animals. For the purposes of plant and animal study rivers are divided into "reaches", each characterized by a dominant fish species. The classification is based on European rivers but can be adapted to suit rivers anywhere.


The reaches of a river

The typical river begins high in the mountains as a small stream, with occasional sharp falls, trickling over rocks. This is referred to as the upper cascade reach, an area of cold, clear, and pure water with few inhabitants although some insects, and the bullhead (Cottus gobio), may be present. Downstream, where the water is still clear and cold and the slope still steep, an amalgamation of small torrents forms the trout reach. There is a sharp increase in the number of fish species, many of them using the pebbles that accumulate in sheltered spots for their breeding places. Salmon will penetrate upstream to the lower part of the trout reach, but they thrive much better in larger rivers with deeper, pebbly areas. These are found in the grayling reach, often called the minnow reach in Britain.

In the grayling reach the well-oxygenated water still flows rapidly but it is deeper and more suited to the salmon. The turbulence of the water prevents many plants from rooting at the edge of the stream but the high oxygen content encourages a wealth of small animals such as crustaceans, worms, insects, and their larvae. The grayling reach is followed by the barbell reach. The slope of the river is easing, the flow less headlong, but it is still cool, clear, and well oxygenated.

The last reach before the estuary is the bream reach, which winds slowly across a flat landscape. The water is warm and murky with suspended silt. The oxygen level is lower but it may be augmented in the summer by the many plants growing in what is often biologically the richest part of the river supporting a wide variety of fish and other forms of animal life.

The last stage of the river's life is the estuary where salt water from the ocean contaminates and changes its character. Estuarine waters are a unique environment in their own right and are not strictly part of the river, which shares them with the sea. Some riverine species – the pike and perch among them – may occur in several reaches but most restricted to the section that is their native habitat.


Life in lakes and ponds

A lake may be part of a river, or its birthplace, and ponds may speckle the valleys and plains through which the river passes. The difference between a lake and a pond is based on the depth of the water. Area alone does not turn a pond into a lake although a large pond is sometimes given the nominal status of one. In a pond, rooted plants may grow from any part of the silty bed because its water is uniformly warm and poorly oxygenated in summer. On the edge of the lake conditions may be pond-like but beyond, where the lake's bed may fall to great depths, no rooted plants can grow. The water is cold and dark even in midsummer and separated from the upper water – warm and containing life forms – by a thermocline or region of abrupt temperature change. There is some mixing of the two water zones during winter storms but in summer the two water bodies exist separately in the same basin.

Plant life in lakes and rivers includes some planktonic floating organisms – richer in lakes and ponds than in rivers, where they would be swept away by the current. In the still waters of the pond larger plants such as frogbit and bladderwort are rootless, but most are attached to some kind of firm substrate. Occasionally they grow up through several feet of water – the water-lily is one such plant. A common feature of stream plants is the possession of dissected underwater leaves that reduce the drag of the flowing water, plus broad-surface leaves that catch the sunlight and thus effect photosynthesis. In their protected environment most water plants have tissues that are unable to support themselves in air yet have great power to resist the relentless tug of the water.

Ponds, lakes, and rivers are stocked with a rich animal life wherever the worst effects of man's presence have not polluted the water and reduced it to lifelessness. Lakes are often large enough to support a fish population of such numbers that a commercial fishing industry can be maintained.

Apart from the species that visit fresh water to drink, lakes, and ponds are also inhabited by creatures of two worlds, the amphibians who spawn in the waters and whose tadpoles lead an aquatic life until they metamorphose. Even afterward they must remain in or close to a moist environment to prevent drying out. Many birds, some of them adapted for swimming by having webbed feet and dense feathers naturally waterproofed with oil, form part o the freshwater populations, as do many mammals. Some of these, such as the muskrat and the coypu, are herbivores, others, such as the mink and the otter, are carnivores. Every major phylum except echinoderms (starfish and sea urchins) is represented among freshwater invertebrates.