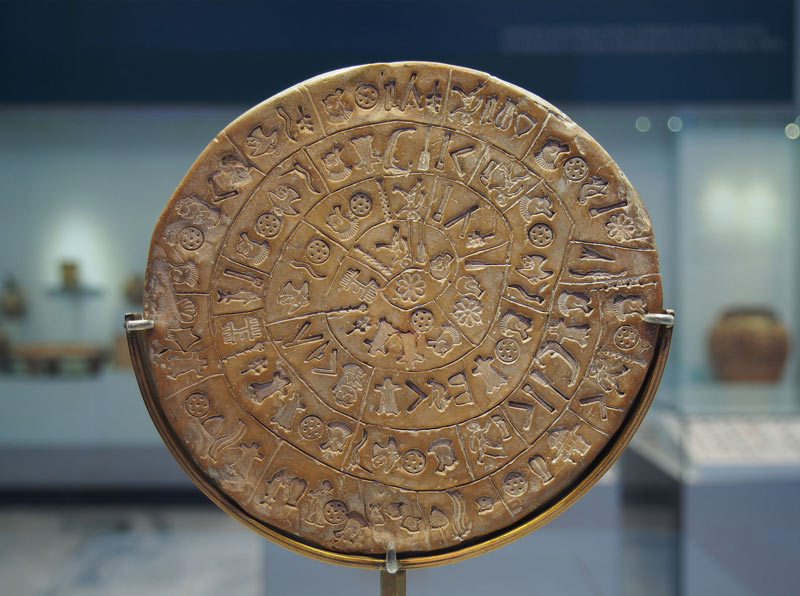 The Phaistos Disc (side A), found at Phaistos, south central Crete, in 1908, On display in the Archaeological Museum of Heraklion.

Some dead writing systems may never be decoded because so few fragments are left. The rongorongo language, recorded on wooden tablets found on Easter Island, was lost by the time missionaries arrived in the 1860s. According to the native Rapa Vui people all the wise men of the island who knew the language had been killed by earlier invaders. Most of the remaining tablets were used for firewood so that only a handful have survived to the present day. The 120 or so main characters found on the tablets, with hundreds of variations, are mostly stylised outlines of humans and other animals, plants, or geometric shapes, written left to right and bottom to top in a manner known as reverse boustrophedron. The reader starts at the bottom left-hand corner, reads a line from left to right, then turns the tablet through 180 degrees to continue on the next line. In some cases, the information recorded is thought to be calendric or genealogical in nature, but most of it has so far proved indecipherable.

Many more specimens exist of Linear A, which, along with Cretan hieroglyphic, is one of two writing systems used by the ancient Minoans. It's been found on hundreds of tablets and signs dating back to about 2000 BCE. Both Linear A and Linear B were discovered by British archaeologist Sir Arthur Evans in the 1890s but whereas the latter has been figured out and the two systems share many of the same signs, Linear A has largely resisted attempts at translation. Because no one knows the ancestry of Linear A – what earlier language it may have evolved from – scholars have used similarities to Linear B to try to make sense of it. Many of the texts in which Linear A is used look as if they're lists of goods, amounts, and the names of people involved in transactions, but only a solitary word, meaning 'total', has been identified beyond reasonable doubt.

No less intriguing is the Phaistos Disc, also Minoan and dating to the middle or late Bronze Age, which features some symbols that resemble those of Linear A and B plus others that are unique. A clay disc, 15 centimetres across, it bears a total of 241 tokens in spiral arrangements on its two sides, apparently made by pressing hieroglyphic seals into the clay while it was still soft. As with the cryptic Easter Island tablets, the problem facing would-be decipherers is the lack of context and of more examples of the same set of characters. A paucity of evidence has also blocked attempts to make sense of the Indus Script, a writing system found in the Indus Valley and dating to between 3500 and 1900 BCE. Although 417 distinct symbols of the Script have been catalogued, they've been found only in very short combinations, making them extremely hard to translate.

Our efforts to decipher lost human languages, even with the best mathematical tools available, suggest how hard it might be for us to make sense of extraterrestrial messages should we ever come across them. Scientists have broadcast radio signals to the stars that contain coded information about our race, our knowledge, and our world, and there are on-going efforts to detect similar artificial signals from intelligent aliens. Presumably smart ETs would try hard to make the content of their signals understandable, but how successful we'd be in deciphering what they were trying to say is anyone's guess. There'd be some common ground in that we were able to pick up their signals in the first place. Also, it's widely assumed that mathematics is universal, so there's the possibility, if we ever find ourselves involved in interstellar communication, of using prime numbers and other basic ingredients of math to establish some meeting of minds. This last possibility was discussed, for example, by Russell F. W. Smith, linguist and Associate Dean of General Education at New York University at the 1963 convention of the Audio Engineering Society in New York. As Smith pointed out, the 'code' of ancient Egyptian hieroglyphics was only cracked following the discovery of a basalt slab at Rosetta near the mouth of the Nile by Champollion. On the stone was an inscription, written by the priests of Ptolemy V, in three alphabets, including ancient hieroglyphic and Greek.

math as a universal language