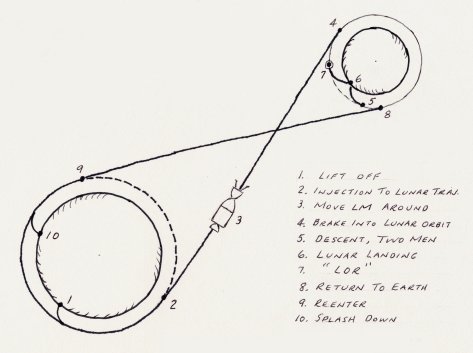 A diagram of the lunar-orbit rendezvous used on Apollo by John Houbolt.

Lunar-orbit rendezvous (LOR) is a spacecraft maneuver involving docking and coupling, fueling or transfer in a lunar parking orbit. The concept of lunar-orbit rendezvous was first discussed by the Russian rocket theoretician Yuri Kondratyuk in 1916 and later by the British scientist H. E. Ross.1

As a means of reaching the Moon's surface, it has the advantage that the lunar landing vehicle can be designed specifically for this task and be of low mass since all the equipment and supplies for the return to Earth can be left in lunar orbit. Against this, however, must be set the difficulty and danger of having to maneuver and dock two vehicles in lunar orbit. Despite this drawback, LOR was the technique eventually chosen to convey astronauts to and from the Moon in the Apollo program. The person primarily responsible for urging this approach over two other flight plans that were being considered, the so-called direct ascent and Earth-orbit rendezvous, was John C. Houbolt of the Langley Research Center early in 1962.