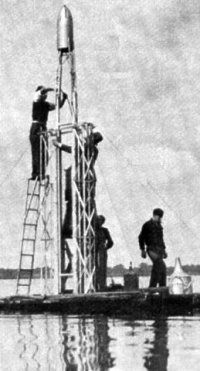 Magdeburg Project was a project, headed by German scientists Rudolf Nebel and Herbert Schaefer, as part of which emerged, in 1933, the first definite plan to build a manned rocket. A test rocket was launched on 9 June 1933, at Wolmirstedt near Magdeburg, but the rocket never cleared its 10-m launch tower. Several more tests followed with mixed results. On 29 June 1933, a rocket left the launch tower, but flew horizontally at low altitude for a distance of about 300 m. This rocket was recovered undamaged, refashioned into a design more closely resembling the VfR Repulsors, and eventually launched from Lindwerder Island in Tegeler Lake near Berlin. It climbed to an altitude of about 300 m before crashing 100 m from the launch tower. Additional test launches were conducted from a boat on Schwielow Lake through August 1933 at which time the Magdeburg Project was abandoned.