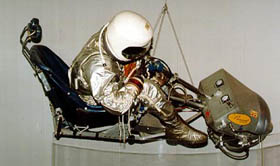 The Marquardt space sled was a unit designed for individual space maneuvering in the vicinity of a spacecraft. In the event, the space sled lost out to the seat-like manned maneuvering unit. The mannequin riding the sled in the photo shown here is wearing an experimental spacesuit which was one of a series tested in the mid-1960s. Unlike the space sled, the suit was part of a continuing evolution which produced the operational spacesuits used today.