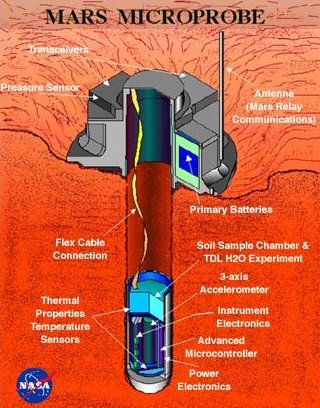 The Mars Microprobe Mission, also known as Deep Space 2, was the second mission in NASA's New Millennium Program. It consisted of two basketball-sized aeroshells that piggybacked aboard the Mars Polar Lander. The aeroshells were supposed to crash at about 200 m/s into the martian surface at the northernmost boundary of the area near the south polar ice cap known as the Polar Layered Terrain, about 200 km from the landing site of the main spacecraft and then send back information on subsurface conditions. Each would have released a miniature two-piece science penetrator probe designed to punch into the soil to a depth of up to 2 m and search for subsurface ice. In the event, no transmission was ever received.