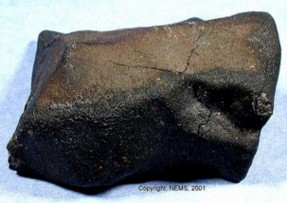 The Murray meteorite is a carbonaceous chondrite that fell near Murray, Kentucky, in 1950. Its analysis by Melvin Calvin provided early support for the idea that prebiotic molecules can form in space. As many as 70 different kinds of amino acids have been found in the Murray meteorite, whose organic composition is similar to that of the Murchison meteorite. In 2001, it was also found to contain a range of polyols – organic substances closely related to sugars such as glucose.1