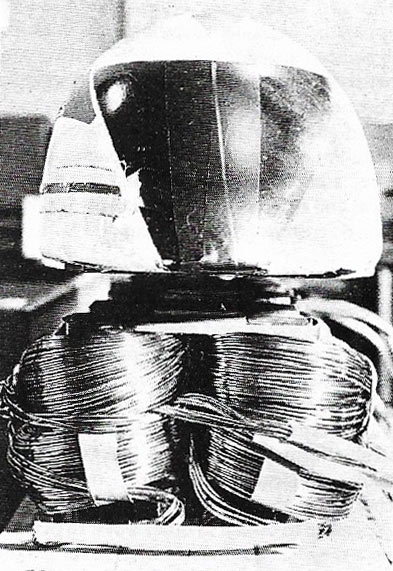 The lift obtainable using magnetism has been applied to make a working model of magnetic levitation train, which is seen here end-on. The train has no wheels, but instead 'floats' over a long magnetic strip that that takes the place of a conventional track, below which a series of electromagnets generate the necessary magnetic field. The electric current can be supplied to these electromagnets in such a way that they behave as a linear motor, so driving the train along the track. Such trains are frictionless, pollution-free and virtually silent.

Magnetic levitation, or maglev, is the suspension of a vehicle above a track by magnetic forces. Eric Laithwaite's work on the linear motor in Britain made maglev a real possibility for high-speed trains; low friction, and therefore high energy efficiency were the main attractions. Laithwaite took his original idea further in the early 1970s by turning the winding sideways and called it the transverse flux linear motor. He demonstrated that not only could it suspend the vehicle, but also propel it and guide it along a track. The difficulty is maintaining stability. The conventional linear motor is in service, however, in the US and the UK for mass-transit systems operation over short distances at low speeds.