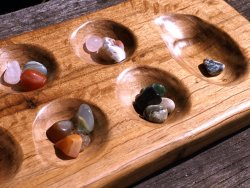 What is today almost universally called mancala is, correctly speaking, the game of wari. Mancala refers to a type of counting game of which wari is a specific example, dating back to ancient times, known in Egypt and throughout Africa and Asia, and probably brought to Europe by sailors returning from these lands.

Wari is played with a board and 48 markers or playing pieces, which are usually small colored stones or shells. The board consists of a piece of wood with hollowed-out spaces. There are two rows of six hollowed-out circular spaces, called cups, on each side, and one larger oval space at each called a reservoir. Players sit across from each other with a set of cups facing them. The game is set up by placing four markers in each of the twelve cups. The first player picks up the markers in one of the cups on his side, then distributes the markers by placing one (and only one) in the other cups, going counterclockwise in a circle around the board. Markers are not placed in the reservoirs, which are for holding captured pieces only. Should there be enough markers that a complete circle of the board is made, the cup just emptied is skipped over. If the last marker put down goes into a cup on the opponent's side, and there ends with a total of two or three markers in that cup, then the markers in that cup are captured, and go into the reservoir at the player's right. Also, if the next cup clockwise from the captured cup has only two or three markers in it, that cup is likewise captured and the markers taken. This continues so long as the cup is clockwise to the last captured cup, has only two or three markers in it and is an opponent's cup. However, a player cannot capture all of an opponent's remaining pieces in a move, leaving him nothing to play. In capturing cups, if there is only one opponent cup left with markers in it, it cannot be captured. Also, you cannot leave your opponent with all empty cups if you have a move that would put some pieces in one or more of his cups. When one side of the board is empty, play is ended. This must happen by a player having to move his last markers onto his opponent's side. At the end of play each player takes any markers left on his side of the board and adds them to his reservoir. The winner is the person with the most markers in his reservoir.