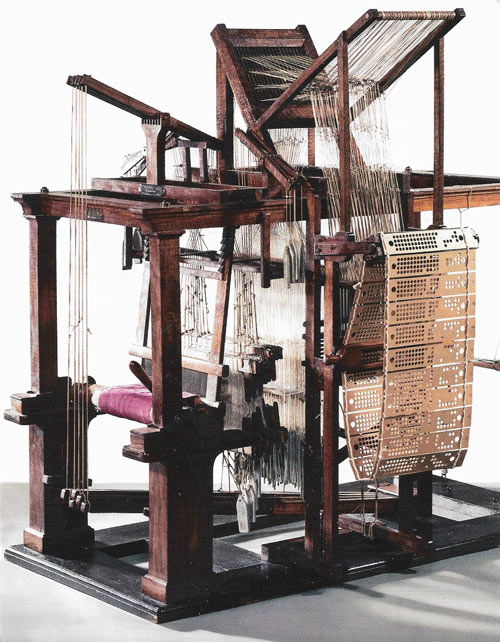 A model of the mechanically programmed loom designed by Jean-Baptiste Falcon in 1728.

In many complicated industrial operations, the setting-up of the machines involved can take as much time as is needed for the machines to preform. With mechanical programmability, the means of controlling the actions of numerous interacting components, and quickly changing their operations, may be set up in advance. For the worker, activating mechanical programs is far easier than setting up machine operations from scratch.

Mechanical programmability is said to have begun in the ninth century, with the invention of a musical organ, powered by water, that automatically played interchangeable cylinders with pins (similar to those of musical boxes). However, the automation of mechanical processes arose in the 18th century. In 1725, French worker Basile Bouchon invented what is considered to be the first industrial application of a semi automated machine. He worked at a silk center in Lyon and devised a way of controlling a loom with a perforated paper loop that established the pattern to be reproduced in the cloth. His invention automated the setting-up process of a drawloom, whereby operators lifted the warp threads using cords.

Unfortunately, the number of needles used was insufficient to allow larger designs to be weaved. Also, on tear in the perforated paper loop made the loop unusable. However, in 1728, Bouchon's assistant, Jean-Baptiste Falcon, improved the design; he expanded the number of cords that could be handled by arranging the holes in rows, and replaced the paper roll with rectangular perforated cardboard cards joined in a loop, which made it easier to change the program.