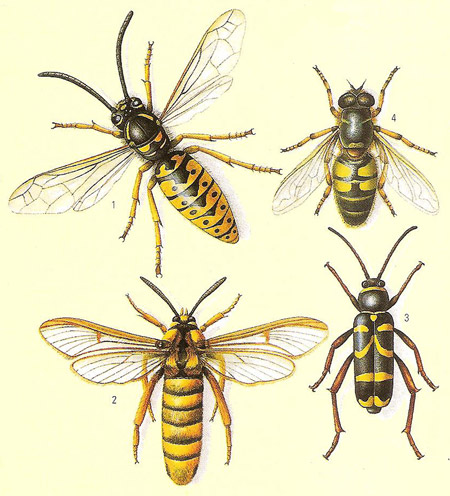 Mimicry is the close resemblance of one organism to another which, because it is unpalatable and conspicuous, is avoided by certain predators. The mimic will thus gain a degree of protection on the strength of the predator's avoidance of the mimicked. Mimicry is well developed among insects.

When coloration increases an animal's chances of survival, it is commonly referred to as protective coloration. Batesian mimicry, named after the British naturalist Henry Bates, is exemplified by hoverflies, which mimic inedible wasps. Similarly, the viceroy butterfly imitates the inedible monarch butterfly. The less common Mullerian mimicry, named after the German naturalist Fritz Muller, involves two or more unpalatable species that share a similar pattern, thus reinforcing it as one of the warnings to predators. A third form is aggressive mimicry, in which a predatory or parasitic species resembles a harmless one, thus allowing the former to remain undetected by its prey or host.


Mimicry of wasps and bees

Many different insects (see illustration) mimic wasps or bees that deter predators with unpleasant stings. Key recognition points of the common wasp (1) are its size, black and yellow body, transparent wings, and tiny waist. One 'imposter' is the wasp-mimic moth (2), whose transparent wings are shaped like a hornet's; the moth even mimics its role model's flight patterns. The wasp beetle (3) convinces at a distance, and also imitates the jerkiness of the wasp's flight. A hoverfly (4) has a black thorax, which gives the impression that the abdomen ends abruptly in a narrow waist, even though this is only an optical illusion.