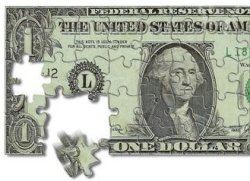 Three people have dined at a restaurant and received a total bill for $30. They agree to split the amount equally and pay $10 each. The waiter hands the bill and the $30 to the manager, who realizes there's been a mistake and the correct charge should be only $25. He gives the waiter five $1 bills to return to the customers, with the restaurant's apologies. However, the waiter is dishonest. He pockets $2, and gives back only $3 to the customers. So, each of the three customers has paid $9 and the waiter has stolen $2 making a total of $29. But the original bill was for $30. Where has the missing dollar gone? (See solution below.)

A version of this problem first appeared in R. M. Abraham's Diversions and Pastimes in 1933.1 See also nine rooms paradox.