Section of the 'citadel' of a mole, showing the nest at the center containing the young. 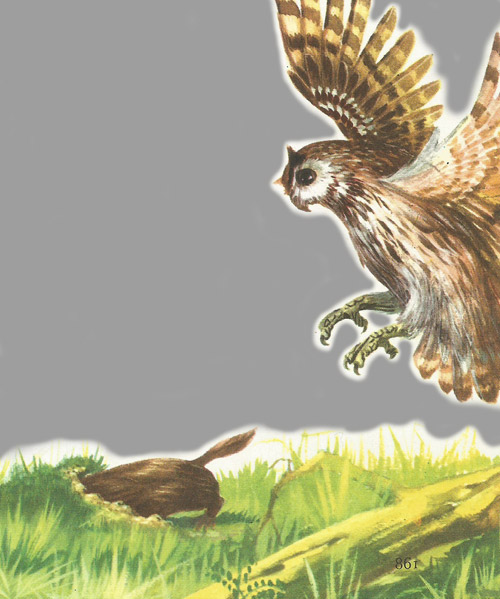 At night moles are preyed upon by owls.

Skull of the mole. 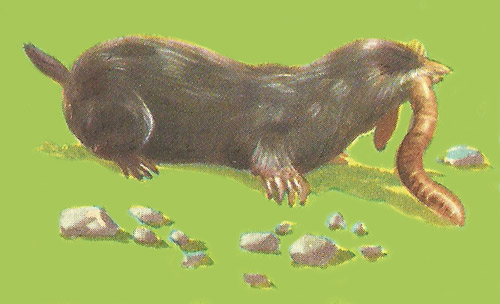 Earthworms are the mole's favourite food.

The mole is a small, black animal with soft, velvety fur. Not long ago it was fashionable to have coats made of moleskin, but today the skin is little used.

The fur of most animals is set in the skin so that it points backwards; this is obvious when you stroke a dog or a cat from its tail towards its head. The fur of a mole has no such set at all and it feels the same whichever way you stroke it. Since the mole spends almost all its time in narrow burrows it may sometimes have to run backwards to find a place in which to turn around. When doing so, fur of this kind will be more comfortable and convenient then the backward-laying hair of most other animals.

Although moles are no longer hunted for their fur their numbers are kept down with traps and poison because they are supposed to be harmful to agriculture. They do damage to the roots of grass or crops and the mounds of earth they throw up are a nuisance to the farmer. But as they feed almost entirely on worms and grubs and insects, many of which are serious pests, the mole probably does more good than harm.

Another place where a mole in unwelcome is in a garden. By burrowing through the roots of plants and by throwing up heaps of earth all over the lawn the mole can do a great deal of damage in a very short time.

The mole lives almost entirely underground and its body is perfectly adapted for digging and for making its way along the narrow, winding burrows that it constructs.

The mole's body is about seven inches long and is very supple and strong. Its tapering snout is made of tough cartilage, so that it can be used for pushing through the earth, and its neck is thick and muscular for the same purpose. As we have seen, the fur is also adapted for movement in narrow tunnels.

The real excavating tools of the mole are its fore-limbs. Their bones are short and stout so that the limbs do not project far from the body, and the paws are large and broad, with powerful claws. They stick out from the mole's body on each side and it uses them to loosen the soil and to force itself forward, almost as if it were swimming through the earth. Its shoulder muscles are immensely strong, and this part of the mole's body has been specially designed for efficient and rapid burrowing.

The mole's hind limbs are normally developed and far less powerful than the front ones.

Moles dig burrows of two kinds: those for living in, which are permanent structures, and hunting burrows, which are used for a short time and then abandoned.

The home of the mole, which has been called its citadel or fortress, is constructed more or less as shown in the illustration, but there is no exact plan or pattern according to which citadel is built.

A citadel consists of burrows are different levels connected by vertical shafts, with walls of smooth, well-packed earth. Often the citadel is covered by a mound or dome of earth. In the centre at the bottom is the nest, a chamber six or seven inches across, that is lined with grass and leaves. The nest is always infested with fleas, some of which are only found associated with the moles; these are amongst the biggest fleas known.

From the citadel the hunting burrows go out in all directions. Most of them run only just under the soil, which is pushed up above them, forming a ridge that can easily be seen. At intervals along these burrows earth is thrown out and forms the mole-hills which are such a familiar sight in fields all over the country.

Moles take no account of day and night; their lives are one long hunt for food to satisfy their enormous appetite, with occasional pauses to rest. They do not hibernate in the winter but burrow away from their nests at deeper levels because insects and worms live deeper down in the soil in cold weather.

The largest nests are those dug by males to live in through the winter, for the males and females live apart except in the breeding season. They breed only once a year. The young are born in a nest of the usual type, usually in April or May.

Looking at a mole one would suppose that it was a slow-moving, sluggish animal, powerful for its size but far from active. This is by no means the case; a mole on the surface of the ground can move very quickly to get to its burrow. If this is far away it can dig its way into the earth and be out of sight in half a minute.

In the spring and early summer, when they have to provide food for their young as well as for themselves, moles will come out at night and hunt for food above ground. At this time they will eat almost anything they can catch: frogs, mice, and even nestling birds. When they are hunting in this way they are often attacked by owls and seldom escape unless a burrow is very near: cats sometimes catch and kill moles, but they do not eat them.

The mole has a very delicate sense of touch located at the tip of its snout, which is equipped with specially sensitive bristles. With these it can test the nature of the soil and seek out its prey. Its sense of smell is also acute.

Although it has no external ears (they would be in the way in an animal that lives in burrows) it can hear very well.

The mole is not blind but has very small eyes embedded in its fur which are sometimes covered with thin skin. Possibly a mile has no sense of sight as we understand it, but it can detect the difference between light and darkness.

Even the skull of the mole is adapted for burrowing; it is broad and strong for thrusting the earth aside. Its teeth are its most interesting feature. They are characteristic of the insectivorous animals, so called because they feed on insects and other small creatures.

The mole has no less than 44 very sharp teeth; the molars are W-shaped, with those of the upper and lower jaws fitting together. They are perfectly adapted for seizing and holding worms and insects and crushing those that have a hard shell.

The mole's appetite is quite extraordinary. Its favourite food is earthworms, and a mole has been known to eat 60 of these in a day, an amount about equal to its own weight. If a mole is deprived of food for 10 to 12 hr it may die.

Earthworms are harmless creatures and the mole does no good by killing them, but it also feeds on caterpillars or the larvae of insects such as wire-worms and leather-jackets. These are pests of agriculture and moles destroy great numbers of them.

Moles are widely distributed in Europe (but are absent from Ireland) and over most of the temperate parts of Asia; in tropical Asia they are only found on mountains. Moles are normally black, but white or albino specimens occur very occasionally.