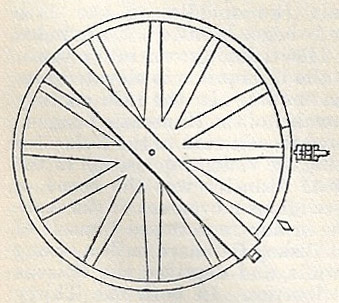 A mural circle is an astronomical instrument used, historically, to observe astronomical bodies at their meridian passage. It consists of a large metal circle, turning on an axis the end of which projects from a solid stone pier or wall (when the name), close to which the circle moves. The plane of the circle is set as nearly as possible in the meridian. Fixed immovably to the circle is a telescope, which by turning the circle is made to point to the star to be observed, at the time of its meridian passage. Two wires, one fixed and one moveable, similar to those in the transit circle, enables the altitude, or zenith distance, of the star to be noted, if the instrument has been properly adjusted, and if the zenith or horizontal point on the circle is known. On the rim of the circle are divisions in degrees, etc, so that the angle through which it is turned can be noted by means of several microscopes, as in the transit circle.

The mural circles once in use at Greenwich were six feet in diameter, and each degree of the division on the edge measured more than six-tenths of an inch in length. The manner of support allowed for a large circle, which gave this advantage.

The mural circle was rendered essentially obsolete by the transit circle.