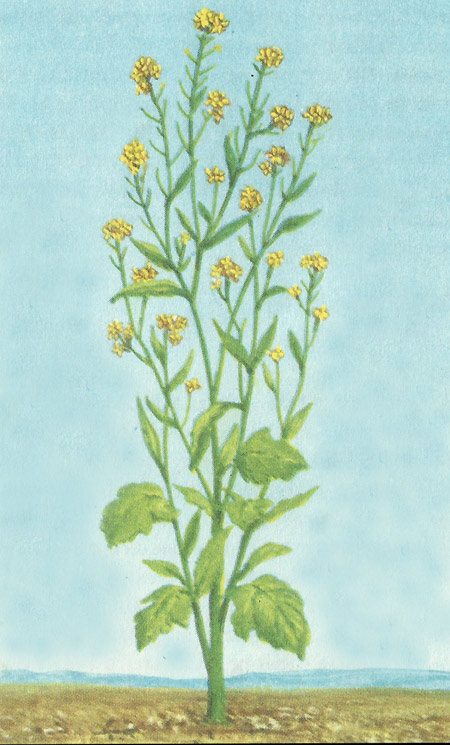 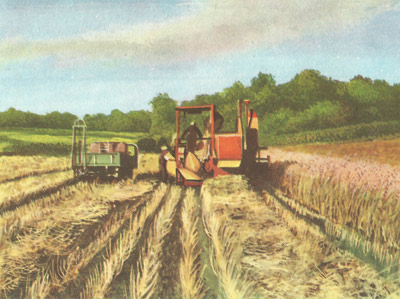 The mustard plant grows in many parts of the world, but the mustard used as a condiment is a special variety, prepared from the seeds of two plants; white mustard (Brassica alba) and black mustard (Brassica nigra). Both are grown in the eastern counties of England, where the soil and climate are particularly suitable for their cultivation.

The seed is sown in the spring; the plant flowers in June; and harvesting takes place in August. Both plants are similar in appearance, with dark-green leaves, small yellow flowers in clusters, and, branching off from the stem, the pods containing the seeds.

The seed is collected into bags, sampled, graded and dried to reduce its moisture to a level at which it can be stored without spoiling. After drying it is screened to remove impurities, then stored in large silos until it goes to the mills.

In the milling process the seed is first shot from bags into hoppers at the top of the mill, where it is thoroughly cleaned. It then passes through heavy rollers (known as break rolls), which crack the seed and loosen the kernel from the husk. In the next stage reduction rolls powder the kernels and flatten the husks into flakes. The powder is then passed through giant sieves and the husks are sent to an oil-extraction plant for the production of mustard oil.

Only the very finest powder passes through the sieves, and the final product is a mixture obtained from milling both white and black seeds. When the powder, called mustard flour, is mixed with water the preparation becomes the mustard you see on the table. Only the powdered black mustard seed has the pungent 'hot' taste: the white mustard is included to give added flavor and sweetness.

Prepared mustards are used on the Continent in various ways. French mustard is usually mild and flavored with herbs or spices in a vinegar base. In Scandinavia all the mustards are sweet; and in Holland they are seldom strongly flavored. In the USA the mustard is generally much milder than the sort used in Great Britain and is often in the form of a thin paste mixed with vinegar, so that it comes to the table in a bottle rather than in a jar. Other items which may contain mustard are sauces, pickles and salad creams.

Several kinds of mustard, all belonging to the same plant family, grow wild in the UK, but are not used commercially, Charlock (wild mustard) is a course weed which often grows amongst corn, and has a bright-yellow flower similar to that of cultivated mustard. Another wild plant, garlic mustard, has a small white flower and grows under hedges or in shady places; this plant grows in clusters and when rubbed gives off a strong smell of garlic. Mustard grows in most parts of the world, but in many countries it is not cultivated on a large scale.

Mustard has a fascinating history and many references have been made to its powers. The parable in the Bible (Matthew xiii, 31) which tells us that mustard, the least of all seeds, becomes the greatest among herbs; and later in the same gospel we read of faith as a grain of mustard seed, faith that can remove mountains.

The ancient Greeks and Romans used ground mustard seed in vinegar; and the Gauls mixed it with honey, olive oil and vinegar. It is mentioned in traditional European proverbs; Shakespeare referred to its good qualities in several of his plays.

In the Middle Ages the seed was usually ground into a paste with vinegar. It was not until 1720 that Mrs. Clements of Durham, England, prepared mustard in the form we now know it.

Mrs. Clements, using a home-made mill, ground the seed to make it as fine as wheat flour. Later she became famous for her mustard and supplied it to many parts of the country. She travelled twice a year to London, where King George I helped to make it fashionable by showing his approval of the special 'Durham mustard'.