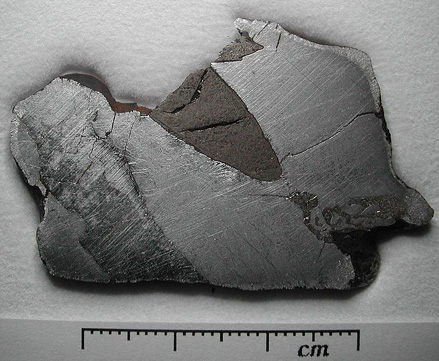 Neumann lines on a piece of the Sikhote-Alin meteorite.

Franz Neumann was a German crystallographer and mathematical physicist who, in two papers (1845,1847), formulated the first mathematical theory of electromagnetic induction, the production of electromotive force (EMF) by changes in a magnetic field. Neumann also conducted research into optics and crystallography.

Neumann lines are found in some iron meteorites. They are groups of very fine parallel lines that cross each other at various angles. Irons containing Neumann lines can easily be cleaved in three mutually perpendicular directions. They are named afetr Franz Neumann who first studied them in 1848.