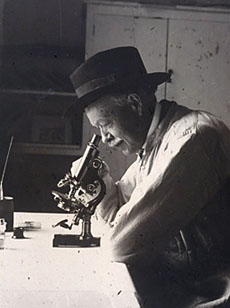 Charles Nicolle was a French bacteriologist who was awarded the 1928 Nobel Prize in Physiology or Medicine for his discovery (1909) that typhus is transmitted by the body louse. He later distinguished between classical typhus and murine typhus, which is passed on to humans by the rat flea. Nicolle was head of the Pasteur Institute in Tunis (1902–32), which under his direction became a distinguished center for bacteriological research.